? The History of The Alabama Legal System 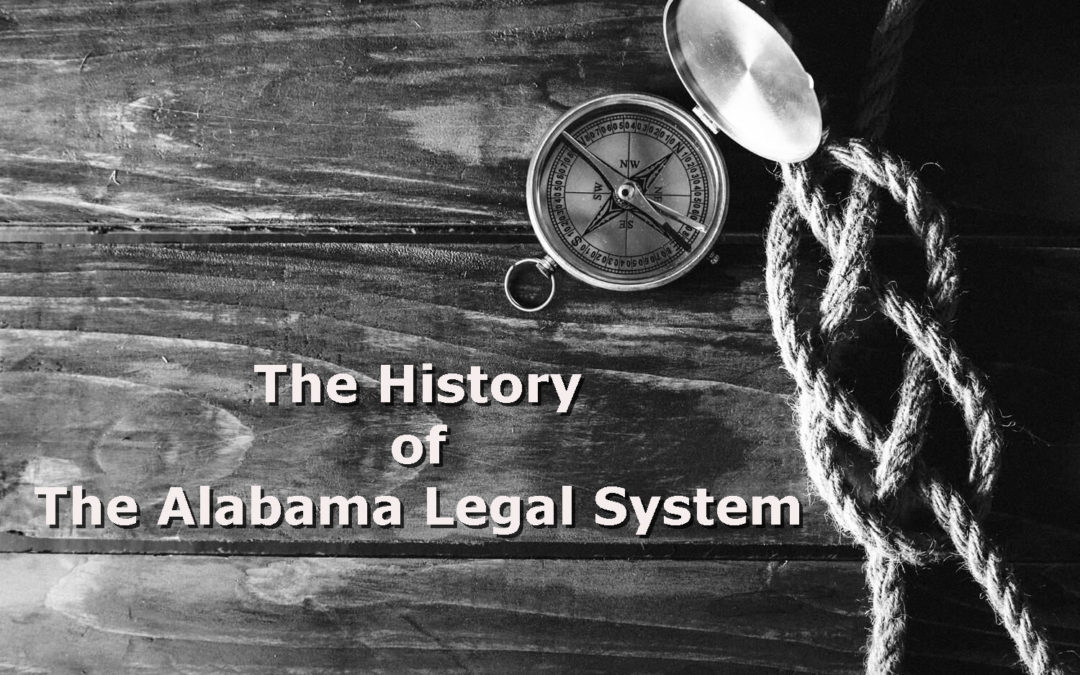 The first constitution of Alabama was established in 1819 and saw the State admitted to the Union. This constitution stated that until the General Assembly decreed otherwise, all functions within the Supreme Court were to be handled by Alabama Circuit Courts. At that time, the system was divided into five circuit courts that now held the powers of the largest Court and performed all duties allocated to them. The first term of the court took place at Cahaba in May 1820, the then state capital of Alabama. Present in that meeting were Honorables C.C. Clay, Henry Webb, Richard Ellis, and Reuben Saffold.

By now, the magistrates of the Supreme Court had to be elected by a joint vote by the two houses of the General Assembly. (This was of course until 1868 when the reconstruction constitution provided that these judges be elected by people.) 1821 saw the creation of a sixth circuit where Honorable Crenshaw was elected judge. After the demise of Judge Webb in 1823, he was succeeded by Hon Henry Minor who was then the Supreme Court’s first decision reporter.

The first regular elections by the G. A. under the constitution were held in 1825 since the inception of the Court. In the year 1832, the courts were entirely reorganized to make a separate tribunal. This would consist of three judges with six-year terms in office. 1851 saw the number of magistrates increase to five, but this figure was again reduced to three in 1853. At this time, the court boasted of its own chambers in the new Alabama State Capitol. No other changes occurred to the Alabama Legal System during the civil war period.

However, 1868 was when things got really interesting. This period saw the formation of a reconstruction constitution that committed the election of judges to the people. After the election of Thomas N. McClellan as Chief Justice in 1898, it would be a few years until the Alabama Legal System saw some changes. It was the legislature of 1903 that increased the number of justices from five to seven as was in effect after the general elections of 1904. 1940 saw the Supreme Court move to 445 Dexter Avenue from the Capitol Building. In 1969, the Alabama Acts Legislative Act 602 was passed. This act increased the number of judges to eight, a number that remains even today.

Today, the well equipped Supreme Court of Alabama is endowed with plenty of powers and authority. This includes the authority to review all decisions by lower courts in the state and the power to determine legal matters that are entirely in their jurisdiction. Furthermore, the court has the authority to issue orders as it sees fit to carry out the general superintendence of the Judicial System of Alabama. The Supreme Court hears out appeals from other courts on matters civil exceeding $50,000. Normally, it is divvied into two separate panels of 4 judges each. With the C.J. presiding over both groups, this allows for faster case resolution and dismissal.
Currently, the Supreme Court of Alabama resolves over 1700 cases annually. However, in cases of the death penalty, law constitutionality, utility rates and other issues related, the full court must convene. It is also notable that 2006 saw the election of Justice Sue Bell Cobb; the first woman to ever serve that post.

It is thanks to the constitution and judicial system that Alabama’s legal system remains fair, equal and protective of all the citizen’s rights. This is one of America’s most efficient and complete legal systems that address almost every issue imaginable. From a ruthless slave trading state to a peaceful haven where everyone has the same rights as their neighbors, Alabama has really come a long way. It’s thanks to the development and evolution of the Alabama legal system that the state now thrives and excels as a great state in the USA.