Discovery and Investigation During a Divorce in Alabama 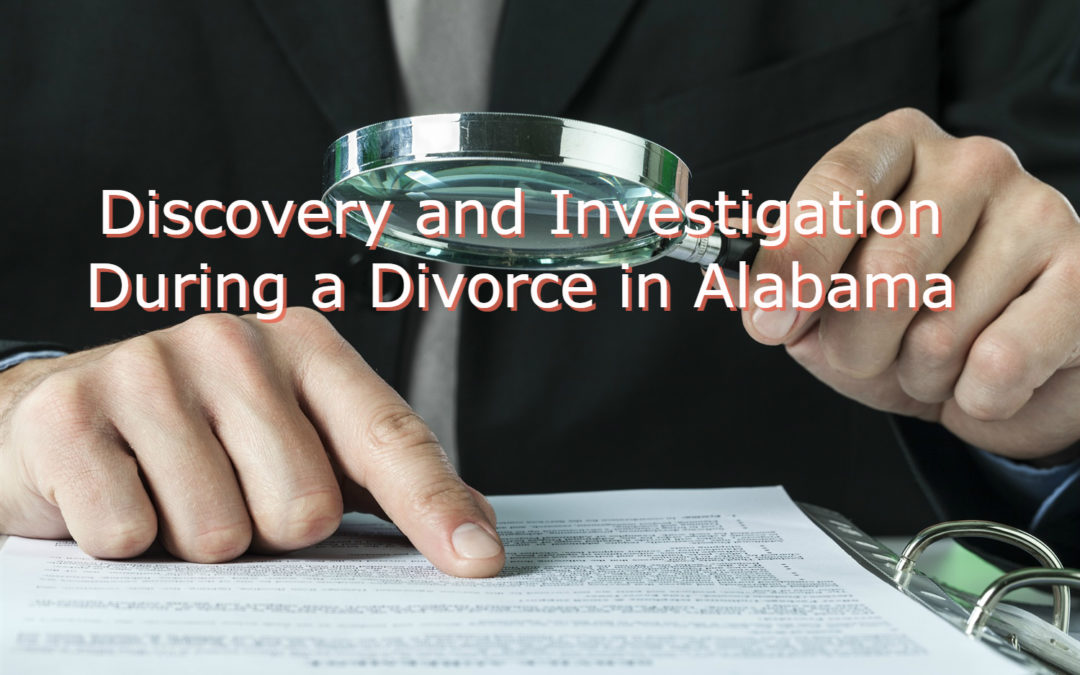 Difficulties can arise for a couple seeking a divorce, including dividing their marital property and assigning marital debts. Some divorcing couples can come to an an amicable agreement among themselves, while others need attorneys or mediators to help guide them to a resolution. In cases where a resolution cannot be found, a decision will be sought from a judge or an arbitrator.

There are two general systems followed by different states in the U.S. in dealing with the division of marital property or the assignment of marital debts: equitable distribution and community property. Alabama is considered an “equitable distribution” state. It simply means that any assets and/or debts shared by a married couple are to be divided equitably, i.e. fair. Property divisions do not have to be equal, only equitable. It is within the purview of the court to determine what is equitable on a case-by-case basis.

The discovery process is a very crucial stage in divorce. Each party discloses all assets and liabilities, among other critical information. Discovery is especially important in trying an equitable distribution case, for the court cannot divide an asset or assign a debt unless it is discovered by the parties.

Here are the usual stage of proceedings in a divorce case in Alabama:

A complaint for divorce, filed by the Plaintiff or their attorney, initiates the divorce process. In addition to naming the parties, the complaint must include the county or counties where the parties reside to establish venue and at least one of the jurisdictional grounds or “causes” for divorce to establish the circuit court’s power to divorce said parties. In Alabama, a divorce can be based on “fault grounds,” such as adultery. However, “no-fault” grounds, including incompatibility and irretrievable breakdown of the marriage, are alleged most often.

The complaint should then request the parties be granted a divorce, an equitable division of property and debts be made, custody and visitation rights be awarded, and such other reliefs be granted, including alimony and child support. Once the filing fee has been paid, the complaint along with a summons shall be served to the Defendant.

Once the Defendant has been served with the complaint, they have 30 days to answer all the allegations raised in the complaint. They can choose to deny, admit or respond to each allegation. The answer, in order to establish a valid controversy, must “deny” the divorce grounds of the complaint—even though the accompanying counterclaim may actually state the same grounds as the original divorce complaint.

Typically, the admissions and/or denials are followed by affirmative defenses and a counterclaim. In the counterclaim, the Defendant alleges their claim(s) for divorce in the same manner as the original complaint. Defendant should also respond to the requested relief by specifying their own desires in regards to the divorce.

Once an answer has been filed by the Defendant, either party may file a discovery motion seeking to obtain the necessary information or documents in support of their position. The methods used can range from scheduled depositions to subpoenas demanding the production of crucial documents from the other party. Discovery produces information on finances, behavior, marital and parenting disagreements as well as other merits of the case. Disclosure of finances is essential in any case involving child support as it is calculated according to the Child Support Guidelines established under Rule 32 of the Alabama Rules of Juvenile Administration.

Once all the interim motions during discovery are ruled upon, the process of settlement negotiations begins. It is during this stage that issues involving the financial obligations of both parties, cohabitation rules, child visitation and custody, among others are discussed. If no settlement is reached in these negotiations, the court sets a final hearing date. At trial, the Plaintiff and Defendant will present their cases with their respective exhibits and witnesses to support their respective positions. The judge will then enter a final judgment adjudicating all matters in controversy between the parties.

In order for property to be considered separate, it must be under the exclusive control of the party claiming it. If the property, or income produced by the property, has been used regularly for the common benefit of the marriage, it becomes marital property.

For the majority of parties, the parties’ marital residence constitutes marital property in Alabama, subject to a few exceptions. The equity of the home is derived from the market value less all liabilities against the home. Liabilities include home equity loans, taxes, and mortgage. Normally, it requires a professional appraisal to ascertain the value of the marital home.

How Important is a Lawyer in this Process?

Although the property division laws in Alabama on paper look simple, they can be quite complex to apply. Individual trial judges across the state address property division in their discretion on a case-by-case basis, leading to a wide variety of results. Thus, it is import to seek the legal assistance of a qualified divorce lawyer to help guide you through this difficult and contentious process and to protect your interests.